The unique partnership and corresponding sponsorship is the largest in ASCO’s history.

The Association of Schools and Colleges of Optometry (ASCO) and Johnson & Johnson Vision have partnered to address the need for greater diversity in the optometric field, the organizations announced during SECO 2022 in New Orleans on Friday.

The unique partnership and corresponding sponsorship is the largest in ASCO’s history, according to ASCO President Kelly Nichols, OD, MPH, PhD, FAAO.

Their goal, Nichols stated is to educate future optometrists that reflect the populations they serve.

“Without greater diversity in schools and colleges of optometry, the profession will be hard-pressed to achieve substantial change,” she stated. With this sponsorship, ASCO is stronger and better resourced to address these goals through expanding ASCO’s Eye on Diversity initiative.”

Thomas Swinnen, Johnson & Johnson Vision’s president North America, stated that the partnership is one of many ways the company is continuing to work collaboratively for a more equitable and inclusive future.

Through the partnership, ASCO will focus on increasing initiatives centered on diversifying optometry’s student body and addressing challenges linked to diversity, equity, inclusion, and belonging in optometric education, according to the news release.

ASCO’S Eye on Diversity initiative, which is supported by the new Johnson & Johnson Vision sponsorship, intends to address all three goals.

As part of the association’s undertaking to increase diversity, the ASCO Board of Directors launched its largest public awareness campaign: Optometry Gives Me Life.

The initiative targeted combatting the declining numbers and diversity of optometry applicants by raising increasing awareness about optometric careers to college-aged students studying in the STEM fields, according to the association.

“This campaign aims to diversify the profile of the optometry profession, with a diverse and qualified applicant pool that is competitive with other health professions for our nation’s best and brightest students from all backgrounds,” Nichols said, in the release. 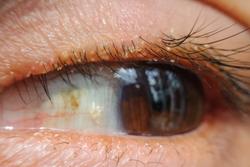